Before buying a pepper spray, you need to understand what makes it effective. All sprays are not the same! The majority of manufacturers will use Scoville Heat Units (SHU) as the indicator of the strength and efficacy of their spray products. However, if a manufacturer is buying raw pepper, they can choose any SHU level they want. Trust me, there are cheap raw pepper out there. That why you can’t depend on the SHU rating to tell you how hot a pepper spray is.

For example, one vendor states that their spray product is rated 5.3 million SHU of the Oleoresin Capsicum (OC) resin. In addition, they say that they use a 2% formula. This translates to 2% x 5.3 million or 106,000 SHU for their pepper product’s formula.

Yet another popular pepper spray maker says that their product uses 2 million SHU of raw pepper and 18% of OC in their formula. However, rather than also revealing the SHUs in the formula, they only state the percentage. Using the same calculation above, their formula should be about 360,000 SHU. But this wasn’t the case when CHROMTEC, LLC conducted an independent verification, with the test results only yielding 175,000 SHU.

Still, we have yet another manufacturer that claims their product to be 18% without telling us it’s 18% of what! Our assumption is that this particular pepper spray maker feels that somehow the less they reveal the better. On testing, their product was found to be only 87,000 SHU.

There are even manufacturers who give zero information; no percentage, no SHU rating… nothing. Surprisingly, some buyers still prefer purchasing their sprays, maybe because they’re so cheap — both the products and those people that buy them!

Simply put, what we’re trying to say here is that making the decision which pepper spray product is the best for you to sell can be quite confusing to you. Ideally, as a seller you want to be confident and proud of what you’re offering your customers. You want to be sure the spray you’re selling to your loyal customers can actually do what it claims to do.

So, are you ready to know what exactly makes pepper spray such an effective self defense device? It’s not the SHU, but the Major Capsaicinoids (MC)!

Major Capsaicinoids are the organic components of peppers that give them their characteristic hotness. Testing pepper products by MC is a lab-conducted, highly-accurate process used to gauge their hotness. The Oleoresin Capsicum (OC) oil that’s extracted from the pepper plant is the organic chemical that contains the MC.

Now you know what’s really behind the effectiveness of your pepper sprays. Let’s also make this very clear: the only number with any actual significance on any pepper spray product is the percentage of MC in its ingredients.

For your information, very few brands have been independently verified for MC percentage. Pepper Shot, Sabre, Wildfire, and Mace have.  These brands have gone out of their way to source for the best raw materials to make sure they sell you only the hottest spray products for self-defense. 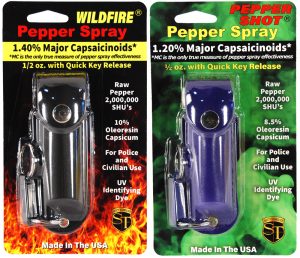 Wildfire and Pepper Shot, my two favorite brands, are really powerful yet more affordable than Sabre or Mace. By getting our sprays from them, we have the same kind of protection at a better price. Since Wildfire is 1.4% MC and Pepper Shot 1.2% MC, it means Wildfire is the most effective spray product you or your customers can get your hands on.

While this may seem like a very small percentage, the Food and Drug Administration (FDA) has cautioned that just 2% MC is capable of causing permanent eye damage. But that isn’t really our intention. For the same reason, please avoid using any bear spray on anyone.

As expected, the market has a number of brands trying to fool buyers. For instance, there’s a well-known vendor doing this. They only indicate on their packaging the raw measurements but never what they have in their final product. That’s quite misleading.

By using their own figures of raw pepper at 5.3 million SHU and MC at 35%, if we apply the formula using 2% of this raw pepper, the MC would would only be 0.7%. That’s just half of what Wildfire contains!

I hope this helped you have a better understanding of what really makes pepper spray as hot and effective as they are. You can now confidently buy your next pepper spray product knowing you’re buying the right product for your self-defense and protection. Look for sprays with the MC percentage and you will be buying the best.