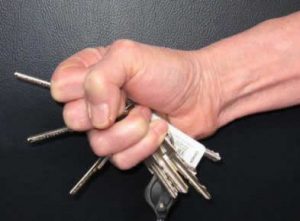 When thinking about self defense, many of us consider how we would use items we have on our person. One of the most common item to use is our keys. In fact, using keys is taught by many self defense “experts” as a good self defense technique. Those dangerous looking jagged keys peeking out from your fingers do look like they could do some damage, but will they really help?

If you haven’t had training in boxing or martial arts, you probably won’t have a very powerful punch. That means any punch thrown, with or without the keys, might not protect you.

Also, putting your keys between your fingers will most likely damage your hand. They could cut your fingers and probably cause you pain when the base of the key hits the palm of your hand after impact. This could cause you to drops your keys, leaving them for the bad guy to pick up. Then you’d be locked out of your car and home.

Secondly, the keys have to be held correctly, or they will deflect away from the target. Try this — hold most of the keys and key ring inside your hand and put two keys on either side of your middle finger. Now go up to a hard surface and gently apply the points of the keys to the surface. Slowly push harder.

Do the keys stay in place, driving forward into the surface or do they move around? 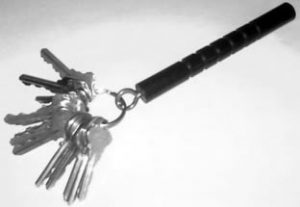 You’re better off putting your keys on something called a kubaton, which is also a good way to keep track of your keys. It’s both a weapon and a handle you can hang onto while slashing your attacker in the face with the keys.

Many people are afraid to carry more serious self-defense devices, because they don’t want them be used against them. People don’t like thinking about the possibility of being attacked and therefore, they don’t think about how they would defend themselves.

The ‘head in the sand’ attitude is never helpful about any problem. It does not make the problem or danger go away. Value yourself enough to think ahead about what you would do in a crisis situation.  Be prepared!