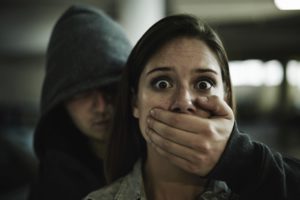 After studying with her friend, a young freshman student begins walking back to her dorm. It was dark outside around 10:00 p.m. and not many people were around. As she turned down one sidewalk she saw a familiar guy that she had met at a party recently. She couldn’t remember his name, but he seemed like a nice guy that night.

As she passed by, he mumbled something and she stepped closer to hear him. That’s when he grabbed her and started pulling her behind a dark building. She reached in her pocket and pulled out her pepper spray. A quick shot to the face and he quickly let go of her arm. He began shouting and calling her names, fearing that he would attack her again, she sprayed him again and ran.

There are criminals out there who believe it is their right to take what they want. Thieves, rapists and murderers who prey on others are just waiting for the chance to catch someone off guard. Being violated in any way, leaves a lasting effect on a person. Some people who are victims of crime feel as if they are to blame. This is never true.

However, it is irresponsible for individuals to walk around clueless when it comes to safety. Being proactive can make the difference in a wonderful college experience or an unfortunate incident that could affect you for a lifetime.

Use the Door Stop Alarm, to block a door from being opened, especially while you sleep. If someone tries to force it open, a 120 decibel alarm will sound.

(None of the links above are affiliate links.  I found good prices for you with free shipping)