How stun guns work is not like you see in the movies. If you hit someone with a stun gun, they’re not going to go unconscious and drop to the floor.

The purpose of the stun gun is to give you time to remove yourself from a dangerous situation. It’s not going to knock someone out. However, it will repel them with pain and muscle contraction.

What Makes A Stun Gun Effective?

There are many brands and models available. I’m always surprised when someone who is looking for something to protect their life, chooses the cheapest they can find. If you go to Amazon, the best selling stun gun is the cheapest model…not the best or most effective. Plus, they make outrageous claims on voltage.

You need to consider what makes a stun gun effective. It’s not just the voltage. It’s the amperage. The voltage just carries the amps. When the first stun guns came out, they had 25,000 volts and were very effective. Voltage was then used as a marketing tool. Manufacturers kept increasing what they said the voltage was until today, you can find manufacturers saying their stun guns have billions of volts…which is impossible!

So, when looking for stun guns, find a brand that will tell you what the amperage is. Science tells us that anything over 5 milliamps can be dangerous. One amp can kill a person. The most effective stun guns will have between 4.2 – 4.9 milliamps. Don’t believe any claim that says a stun gun has more than that.

There is a manufacturer like that. Not only will they honor their lifetime warranty, but they don’t require a receipt. Just send the defective stun gun back to them and they will replace it. That company is Safety Technology. They’ve been in business since 1986. The most honest company I’ve ever known.

Should You Get A Stun Gun With A Disable Pin?

Many stun guns come with a disable pin wrist strap. If your wrist is through the loop and someone grabs the stun gun from you, the stun gun is disabled and won’t be capable of being used against you.

This is a nice feature. However, others prefer a stun gun without the disabling wrist strap. They don’t want to be concerned about getting their hand through the strap whenever they need to use it. Also, those wrist straps have a tendency to get lost making the stun gun useless.

How To Prepare Your Stun Gun for Use?

First of all, read the instructions.

Charge it and check it once a month. Don’t put it on the charger every day and overcharge it. Plug it in at night, unplug it in the morning, or roughly eight hours of charging. And then test fire it. Don’t test fire too long or you will burn it out.

If the stun gun has a disable pin, make sure its plugged in. The stun gun won’t work without it.

How To Use Your Stun Gun

First of all, make sure your stun gun is charged. If you are in an uncomfortable environment, like walking to your car at night, have the stun gun in your hand or easily accessible. If someone approaches you will ill intent, keep the stun gun hidden. Hold it behind you or position yourself so he can’t see it.

I know many “experts” will tell you to fire it off and the sound and spark will scare an attacker off. Maybe it will or maybe it won’t. If it doesn’t, he now knows you have a stun gun and will adjust accordingly.

The only important thing, is you removing yourself from a dangerous situation. You want surprise to be on your side. This is your life we’re talking about. You need every advantage.

So, keep the stun gun hidden. Also, don’t run or back up. If you run, he will probably catch you. If you back up, he will still reach you. Stand your ground!

Now is the time to adjust your attitude. Turn any fear your feel into anger…get really mad! Bare your teeth in a sadistic smile. Feel pleasure in the thought of the pain you are going to inflict. Speak in a loud voice to him. The more rude and aggressive the better. “WHAT THE F**K DO YOU WANT?”

Now you have the right attitude. This alone could get him to change his mind and leave. Remember, he is a coward. He’s looking for a helpless victim. You will not be that helpless victim!

When the attacker gets within touching distance, hit him with the stun gun and press the trigger. The stun gun won’t spark or make the loud noise it does when you test fire it. This is because the electricity is going into his body.

His first instinct will be to get away from the pain. Push forward, keeping the stun gun on him. Don’t hit him once then wait to see what happens. Stay on him. I even suggest you grab hold of his shirt or jacket to maintain contact. Remember, he is no longer the attacker…YOU ARE!

Now, where should you hit him? The neck, groin and under the arms are considered the best places. However, if someone grabs you from behind, use the stun gun on his hand or arm to free yourself, then turn around and attack. 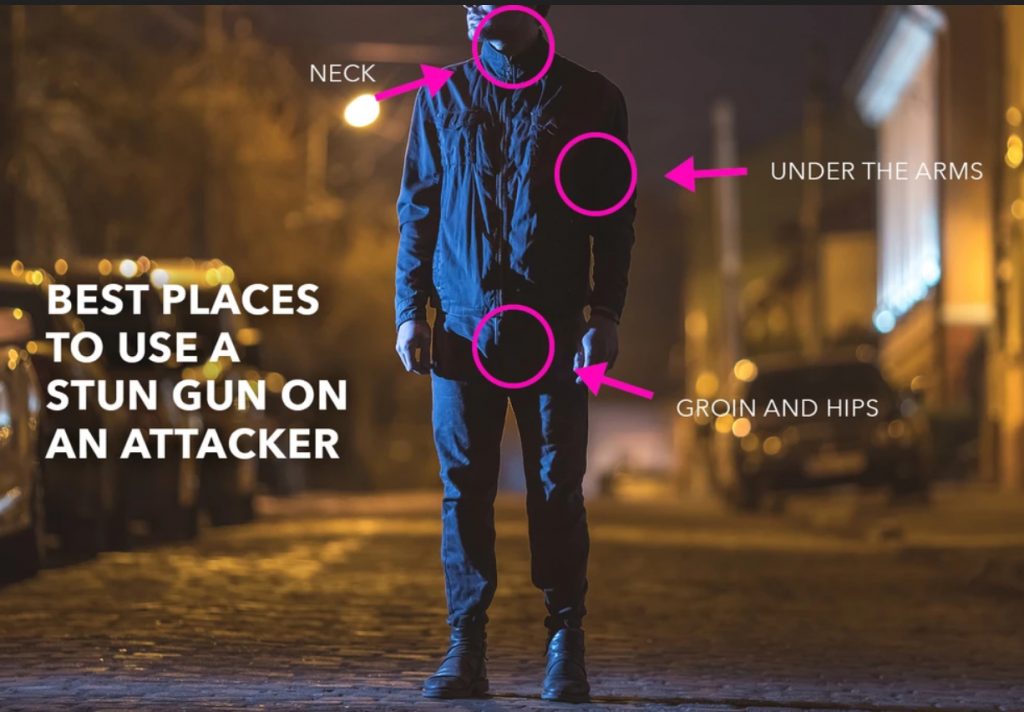 Remember, the purpose is to give yourself time to get away. After you stun him, place a well-aimed kick in his groin, and continue to your car or another safe place.

Do what is necessary to get back home to those who love you.